Three years ago a gutsy Québécoise came to East Africa ready to do some development work wherever she could. Annie Pageau, a paper mill engineer originally from Chicoutimi, formerly worked for big companies such as Proctor & Gamble where her specialty was soft toilet paper.

After her six months at the prison, Annie, together with the prisoners, had learned how to make handmade paper.

There is very little paper production in Uganda and so Annie wasn’t immediately sure where she could best use her skills. Eventually she was placed as a volunteer at the Kampala prison where they had a project involving making paper from water hyancinth (a weed that is quietly strangling the country’s famously large Lake Victoria). Though she says she is not an artist nor a craft person, but an engineer, she decided to give the prison project her best shot.

After her six months at the prison, Annie, together with the prisoners, had learned how to make handmade paper. She also travelled to Kenya where she visited paper-making workshops and talked to artists. After her research, Annie quickly realized there is a market for this kind of paper and no one in Uganda was making it on a bigger scale than the prisoners’ operation of 15 sheets a week.

Agriculture is the dominant sector of the Ugandan economy, employing between 80 and 90 percent of the workforce. Uganda’s GNP per capita is $170—the seventh lowest in the world. Ugandans’ average life expectancy is only 45.5 years and there are currently almost one million orphans under the age of 15 who have lost their mother or both parents to AIDS.

Annie wanted to do a project in Uganda that was labour intensive. Her main goal was to hire people and give them a chance to have a job where they enjoy what they do, where they can learn and work together. She hopes to make a difference in workers’ lives and therefore in the community as a whole.

After dismissing the idea of working for someone else and deciding against starting a non-governmental organization (NGO) because she didn’t want to be dependent  on foreign funding, Annie decided to rent a building and start a paper-making company, Naturaleaf, as a means of community development. The goal for Naturaleaf is to be completely sustainable and income-generating. When I ask Annie if it is yet, she says, “almost.” The big start-up investment came from her personally. As she explains, “It used to pay very well to make toilet paper!” She made an initial investment of $8,000 Canadian dollars.

“We’re very close to breaking even though I’m not even looking at a salary of 10% of what I used to make. But if I make enough to live here and cover the costs of the projects I’m happy. And eventually we will grow a bit bigger.” She has chosen faster growth over profit: “If I’d kept it at my initial 7 workers, I’d probably be more profitable.” Her company has grown to employ a fulltime staff of 25 people (all of whom have health benefits).

Annie is always looking to develop her business. She would like to sell paper in Canada and is also currently trying to get into zoo giftshops in the States. She sells in Kenya and Tanzania and has one buyer in England. Annie is a patient woman, she knows the market is bigger in Kenya but she wants to keep production in Uganda. “I love Uganda,” she emphasizes.

She knows Naturaleaf’s niche and knows she can’t compete with Asian producers who work on a much bigger scale. Where Naturaleaf can truly excel is in special orders: cards, wedding invitations  and custom-made stationary—the big factories don’t bother with that stuff.

Annie introduces me to Winnie who is busy working on 30 large-size menus for a local Italian restaurant called Villa Flora while her colleague is doing a special order of 400 delicate cards made from pineapple fibers.

The staff get paid according to how much they produce as a team. On the wall there is a budget/production sheet listing all the numbers. The monthly sheets include a production goal of which they will earn 30% of the sales. All company expenses  are listed including Annie’s salary as well as all overhead costs. It is a truly transparent business. 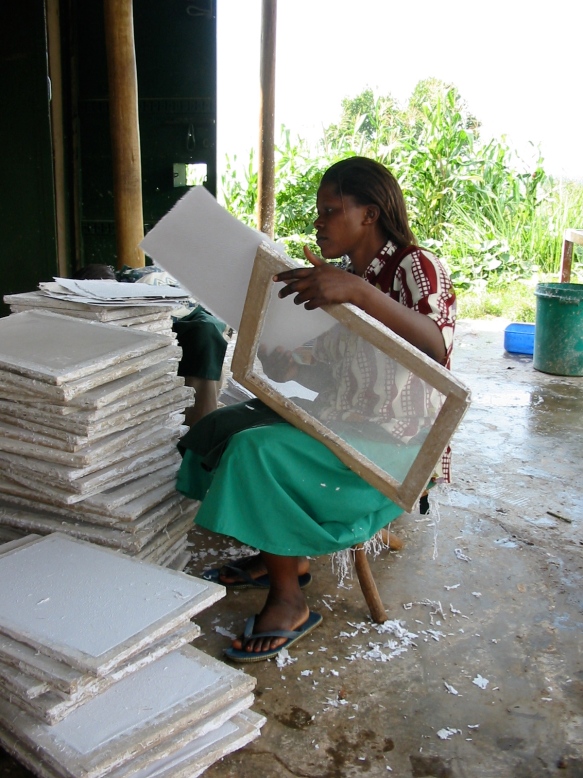 When Annie has free time she goes out into other communities and trains women how to make paper so they can then become suppliers. Naturaleaf also gets recycled paper from the World Food Program which Naturaleaf can then recycle into stationary.

Training her staff was a major and time-consuming  challenge for Annie. Because of brutal political regimes that spanned almost two decades it is a challenge to inspire in Ugandans the idea of working for the future. But thanks to her perseverance Annie has achieved quality production. Naturaleaf’s sales last year were 40 million Ugandan shillings (roughly $35,000 Canadian dollars). This year she is anticipating sales upwards of 70 million Ugandan shillings ($60,000 Canadian dollars).

I notice on one of the walls there is handwritten set of instructions with an illustration beside each step.

How to Make Paper

When I heard about Annie and her company I was expecting to meet a much older woman—she is in fact only 30 years old but regularly gets mistaken for an18 year old. The day I meet her she is wearing a matching forest green top and pants made from traditional African fabric. She has bright big brown eyes with super long eyelashes and at little over 5 feet tall she has a giant smile.

When talking about her former job experience in big companies back at home, she says: “Too many big boxes. The last one made the mistake of putting me in an office. That was the end of me. At least when I was on the paper machine I was having fun. You get dirty, you roll in dust and you’re playing with big machines every day.” She hopes to develop new products for Naturaleaf  and new markets but points out that there is no time left when you work 7 days a week.

July 2002 marked Naturaleaf’s 2 year anniversary. Naturaleaf’s success is a testament to the staff’s hard work and to Annie and her wonderful mix of independence, compassion and initiative. Annie has succeeded in making a difference in the lives of her 25 staff members and in their community as a result.

This article was produced with the support of the Canadian International Development Agency (CIDA). It was published in Canadian Living Magazine in December 2003.