In late September, Prairie Dolphin went on tour to Canada for two weeks. The sea in Victoria, British Columbia is freeze-your-butt-off cold, even colder than our Irish Sea. But there is now a new swimming venue that was especially cleaned up by divers and volunteers this past summer with a swanky pontoon and everything: The Gorge Waterway, where the river meets the sea and connects Victoria Harbour to Portage Inlet. They even hosted a swimming festival. 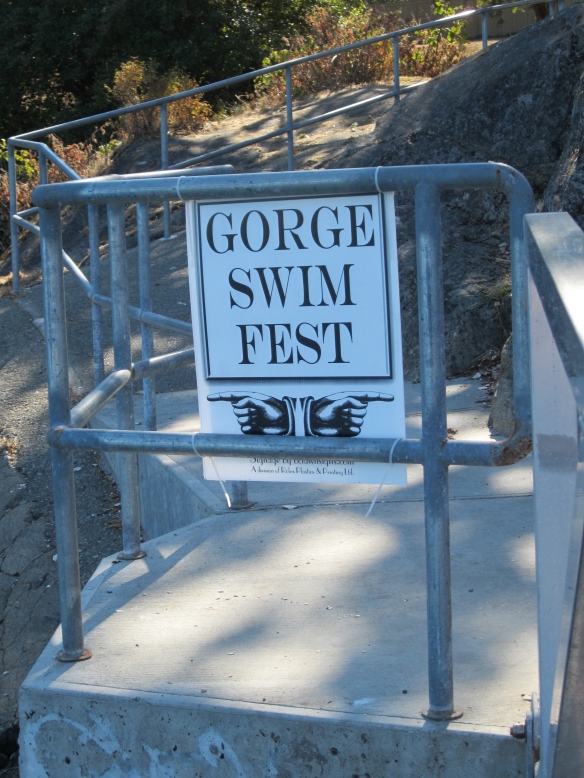 My mother is the original sea lioness. She brought me to the Gorge on a super sunny, Indian summer day with the autumn leaves orange and red. I somehow imagined the water would be warm… I climbed down the mossy wooden ladder and got in. 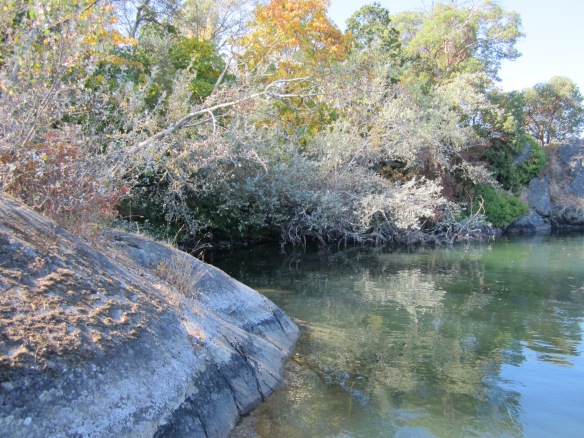 It was a novelty to be swimming somewhere other than the Irish Sea. This felt more like a lake. It was wonderfully still except for the floating reeds and tiny minnows scurrying around me and the odd seabus taxi pootling by and a school of kayakers paddling towards the Craigflower bridge. (more on this swim in an upcoming piece in the Globe & Mail Life section) 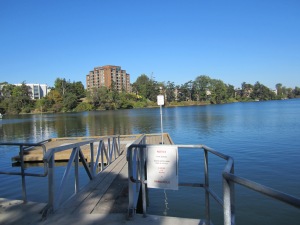 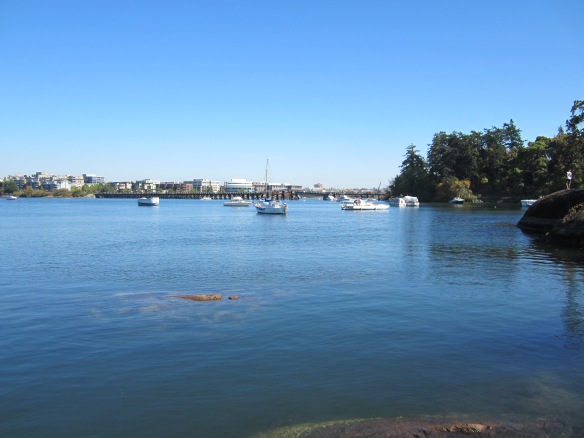 Another Victoria evening, down at Dallas Beach I stumbled onto a proper wild swimmer’s cairn. Cosmic, I thought… 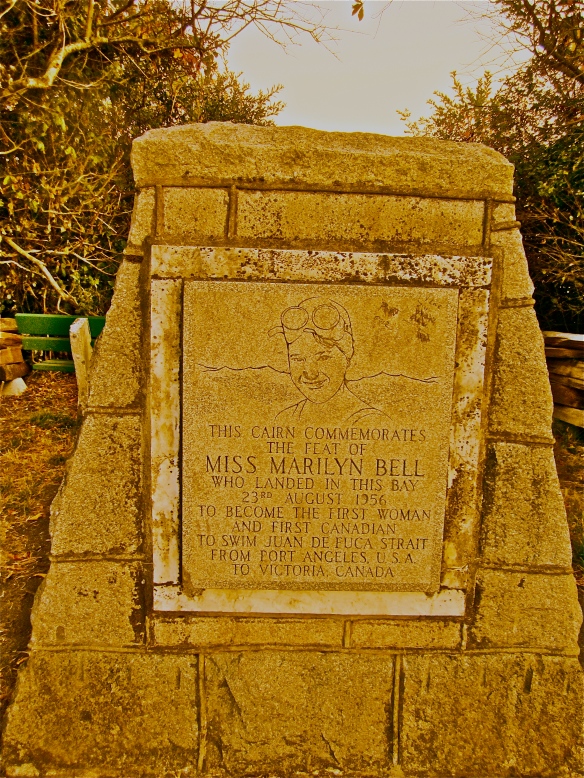 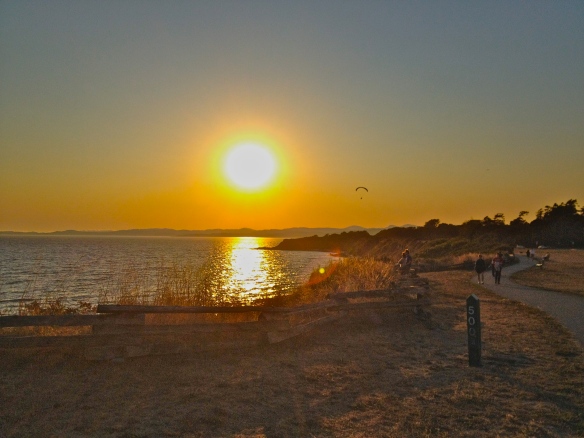 One of the many great things that happened in Victoria was I met up with a friend for lunch who had just been Stand up Paddling in a dress and a pearl necklace along with a denim coat underneath a life jacket. SUP is something I’ve seen before and wondered all about. I really dig the Hawaiian vibe. Go to this link to read all about her seal activities and watch the video, it’s super cool:

Back to Ireland and to Joyce’s “snot-green, scrotum-tightening sea”, or a place I now call I home. Jetlagged, groggy and blue, I texted the girls to say when are we swimming? 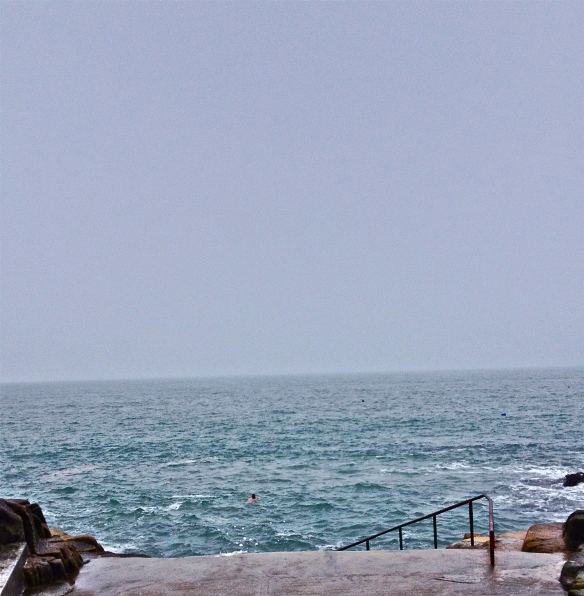 First Swim Back was the jetlag blues killer. Perfect, cold, totally transparent water did exactly what I needed it to, brought me back to my senses and filled me with gratitude to live only 10 minutes away from this chunk of bliss.

Second Swim Back or alternate title, Glowing Ladybits, was far more adventurous. It was October already and C picked me for a 6:30 a.m. swim. It was pitch black outside ( we hadn’t quite accounted for how dark it would be, that the season had changed and gone was our summer light). Luckily Sandycove had streetlights. The other help was the fluorescent, neon green plankton—at least I assume that’s what it was. All the locals drying off when we arrived were laughing about the possible meaning of the lime green glow in the water. Was it Sellafield’s nuclear waste or Thai Green Curry? I really wish I had an underwater camera that would be good in the dark too so I could show you how trippy and amazing it looked. Imagine your hands carving out oceanic Northern lights with every stroke in the black water.

I think each wild swimmer has ways of gauging how cold the water actually is. For me when I feel it in my actual bones I declare it goddamn cold. That dark morning, I was aware of my calves and forearms as stiff batons. And my ladybits were one solid cold block. That’s definitely a colder water than the kind when it’s just a scalding tingly feeling on the surface of your skin. We discussed whether I could use the term ladybits in my blog, but given all the attention the shrinking of men’s willies in cold water gets in popular culture, surely the term ladybits is fairly harmless and yet so relevant.

Apparently C’s husband thought she was crazy for going out for a swim at this time of the day in the dark but what was even crazier was that she had two others to go with her. Every stroke made a disco green wave.

I love the way we meet up, get undressed and literally step into another dimension, just like we have our own funky transformer Star Trek elevator. And the funny thing is, on our new planet we often talk about the most mundane things like how many years you wipe your kids butts for and clip their toenails.

Saw a Tarzan-like man with glamorous thick wavy chestnut brown hair swimming in the seriously stormy sea at 40 foot. Gales and floods the night before made for a rambunctious ocean and so me and the girls swam around the corner at the much mellower SandyCove.

Our cove is manageably choppy, while around the corner it’s wild. S is from Florida and likes to speculate on the whereabouts of sharks. I change the subject and call a lice summit as it’s new to my monkeys. My more experienced parent swim buddies talk me through strategies in the choppy waters involving different potions and types of combs.

Later we walked back around to see the water rage. Around the corner, behind the changing area, we were confronted with Tarzan Man using what can only be described as an elaborate butt floss drying technique, gleefully, like my 4 year old’s patented bum dance.

Despite our surprise, we agreed if we weren’t self-conscious about our bodies we too would’ve enjoyed being unabashed and naked, flapping our bits gleefully in the water and on land but that was not going to happen anytime soon…

C texted to say there was an Arctic front blowing in on Thursday and so Tuesday was last chance to swim in mild weather. Plus the Donegal postman was forecasting a snowy winter this year and Paddy Power was giving him good odds. We showed up again to a wild sea. An oldtimer told me to be careful because it was “lively” today. Good adjective I thought, understated.

It was foggy, there was a big grey battleship 100 yards out. I got in and didn’t even feel the cold such is my love of the experience and the quality of my boots and gloves. I wouldn’t have gone in alone, it was too feisty and bouncy. With my buddies though I was able to enjoy the big waves in the safety of numbers.

Over a big wave we suddenly saw three snorkelers and wondered what they were doing in this crazy water and where had they come from?  But they probably wondered what are those broads doing in this huge water? People often come snorkeling out of nowhere here. I like to imagine some people just have to see some marine life some days.

Those last two swims were at lunchtime and so I’ve got a new ritual of having a hot chocolate and picnic in the car, looking out to sea, which lots of other people seem to be doing too. When I first moved to Ireland someone explained that bringing a woman to the seaside and sitting in a parked car was like Blueberry Hill or Inspiration Point on Happy Days, it’s for snogging! Must drag Seadog away from his desk for swimdate one of these days.

What do you think? Suggestions?